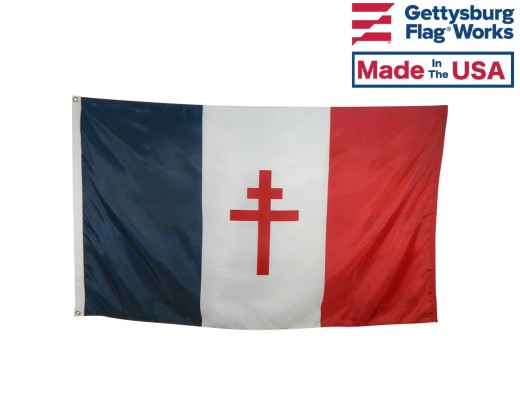 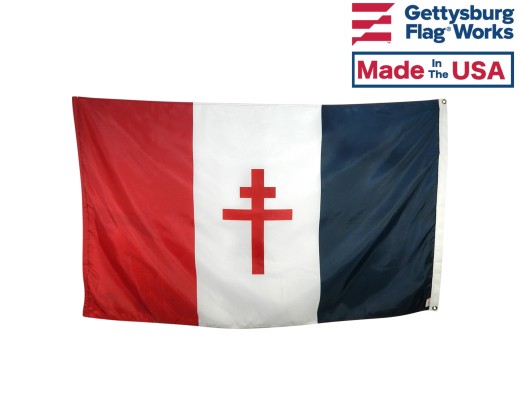 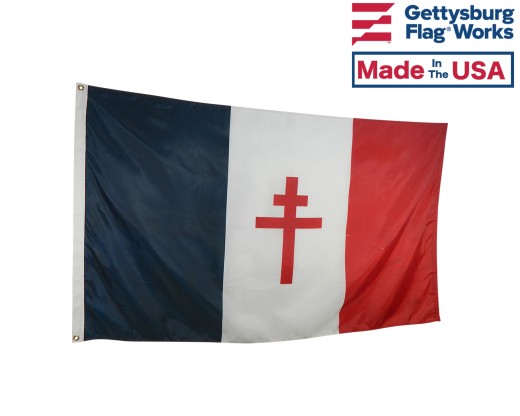 About the Flag of Free France

Free France was established in London as a government-in-exile following Hitler’s invasion of France during World War II. The newly formed political entity needed a symbol with a strong historical reference to oppose the Nazi swastika, and so the Cross of Lorraine was adopted and added to the French tri-color flag in June 1940 to create the Flag of Free France.

After Nazi Germany defeated the French Third Republic during World War II, Prime Minister Paul Reynaud resigned, and Marshal Philippe Pétain was appointed in his place. Pétain negotiated an armistice with Germany, relinquishing Northern and Western France to the Axis power, and establishing the German puppet state of Vichy France.

France was bitterly divided by the conflict and, with the exception of French possessions in the Pacific, India and Africa, de Gaulle received little support from the territories of the French colonial empire. Nonetheless, the Free French Forces went on to fight the Axis and Vichy troops as an Allied nation and served in almost every major campaign until final victory was achieved against Nazi occupation in Europe and Vichy France.

About the Free France Flag

Since Pétain’s Vichy France had retained the French tri-color as the national flag, Free France needed an ensign of its own. In June 1940, the Flag of Free France was created, featuring a red Cross of Lorraine with a single vertical bar and two shorter horizontal bars in the white center panel of the traditional French flag.

The Cross of Lorraine was likely proposed by Vice Admiral Muselier of the Free French Naval Forces, who would’ve remembered the symbol from his childhood in Lorraine, France. The unique cross, whose origins date back to the birth of Christianity, became a symbol of resistance and hope for the province of Lorraine at the end of the Franco-Prussian War in 1870-1871. With similar sentiments following the armistice of 1940, the cross became a fitting symbol for Free France, as well, and it remains a meaningful symbol of French patriotism today.

How to Buy the Flag of Free France

Our Free France flag is digitally printed on durable, all-weather nylon with a canvas header & brass grommet attachment. Available in a variety of sizes, the Free France Flag can be purchased online, or by calling 1-888-697-3524.

Looking for other flags from France? Browse our collection of French Flags, or contact us online for additional assistance.