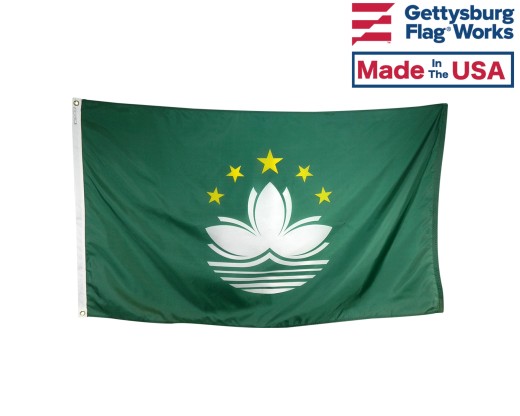 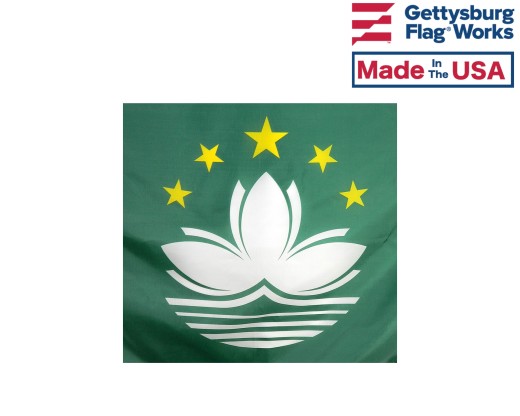 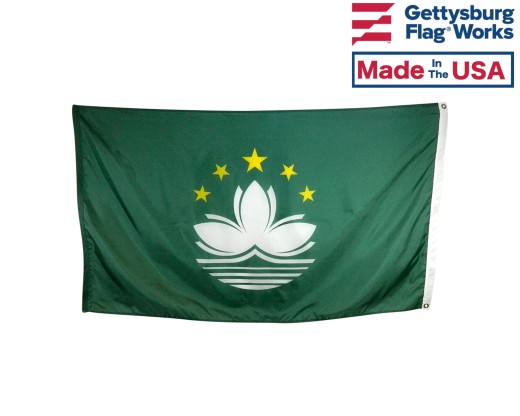 About the Flag of Macau

Originally a Portuguese colony, Macau was transferred to the People’s Republic of China in 1999. As a special administrative region of China, Macau maintains separate governing and economic systems, as well as its own regional flag.

Colonial-era Macau used only the Portuguese flag, as there was no territorial flag to represent the region. However, between 1975 and 1999, the Municipality of Macau flag was used at sporting events, and the flag of Portuguese colonial Government of Macau often represented the territory in international forums.

The present-day flag of Macau, officially known as the regional flag of the Macau Special Administrative Region of the People’s Republic of China, was officially adopted in 1999. In a symbolic transfer of power ceremony at a pavilion specifically built for the occasion in November 1999, the new flag of Macau was hoisted, and the Portuguese flags were folded and carried away.

The flag is light green and features a white lotus flower above a stylized bridge and water with an arc of five gold five-pointed stars. The lotus is the floral emblem of Macau, and the water symbolizes Macau’s position as a port. The bridge represents the Governor Nobre de Carvalho Bridge, one of the most recognizable landmarks in the territory, which links the Macau Peninsula and the island of Taipa. The five stars, one large star in the center and two smaller stars on either side, mirror the design of the flag of the People’s Republic of China, signifying the relationship between Macau and its sovereign state.

The flag of Macau was designed by Xiao Hong, a professor of arts and crafts at Henan University. It was one of more than 1,000 entries considered for the design in 1993. A Xinhua news agency reported that Xiao designed the flag after reading a 600-word tourist guide on Macao. A place he had never been, but visited for the first time three years after the flag was adopted.

How to Buy the Macau Flag

Our flag of Macau is digitally printed on durable, all-weather nylon with a canvas header & brass grommet attachment or a pole sleeve with fringe for indoor use. Available in a variety of sizes, the Macau flag can be purchased online, or by calling 1-888-697-3524.

Looking for other flags from China and Asia? Browse our extensive collection of Asia Flags, or contact us online for additional assistance.