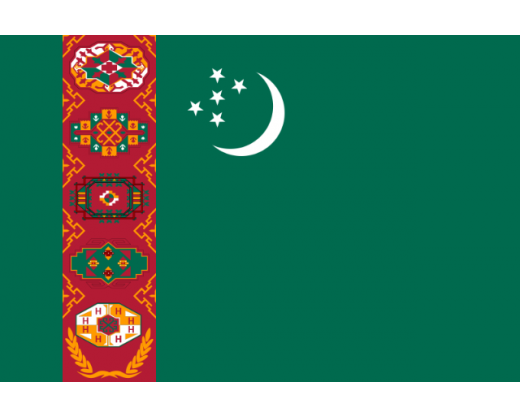 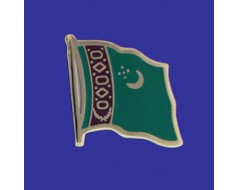 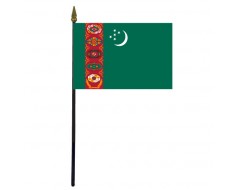 The flag of Turkmenistan has a bright green field with an elaborate vertical stripe near the hoist and a set of five white stars with a white crescent near the stripe. The five stars represent the country's five provinces, while the growing crescent represents the nation's hopes for a better future. The stripe is made up of five guls, which are traditional patterns that are used to weave carpets in Turkmenistan. The carpet patterns are used in order to represent the five tribes of Turkmenistan. A pair of crossed olive branches are placed below the guls in order to break up the design and honor Turkmenistan's dedication to political neutrality.

History of the Turkmenistan Flag

The first flag to represent Turkmenistan was that of the Russian Empire, but the nation gained a unique Turkmenistan flag following the Russian Revolution.. Turkmenistan became a Soviet Republic at that time, and the nation's new flag resembled those of the other Soviet Republics. The flag had a red field with a crossed hammer and sickle emblem in the canton. Turkmenistan went through a series of other flags with similar designs during the Soviet period, but it adopted the final flag of the era in 1953. It had a solid red field with two horizontal stripes of blue that ran cross that field and a golden star above a crossed hammer and sickle in the canton. That flag remained in use after the fall of the Soviet Union until Turkmenistan could design a new flag. The new flag was adopted in 1992 and differed from the modern flag only in the details of the colors and emblem. The design changed slightly in 1997, and the modern version finally came into use in 2001.