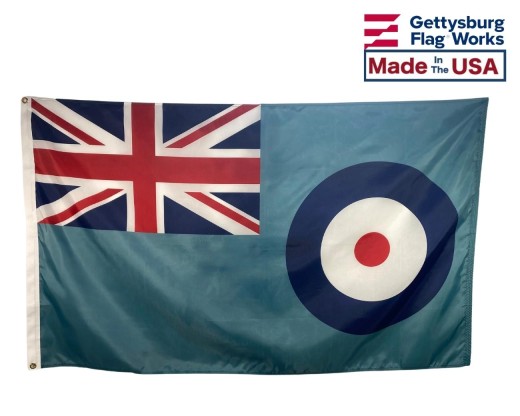 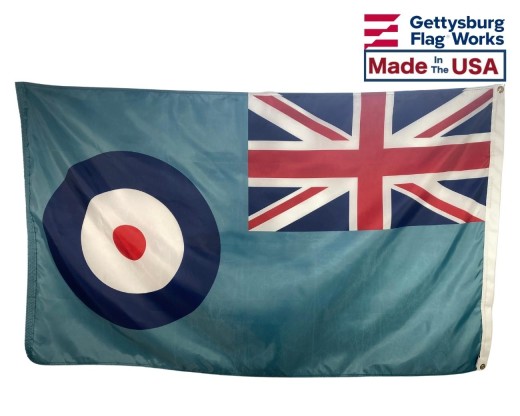 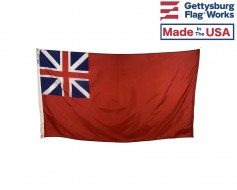 Historic flag of Great Britain (UK) is expressed in the c... 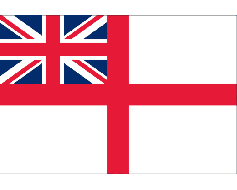 About the Royal Air Force Ensign

The Royal Air Force Ensign (RAF Ensign) is the official flag of the English Air Force. It was introduced in 1921 and has been displayed on the west side of the Cenotaph in London since 1943. It is flown over every Royal Air Force station during daylight hours, as well as the Ministry of Defense building in Whitehall, London.

The RAF ensign has a field of air force blue derived from the light blue uniforms issued to the British Royal Air Force in 1920. The Union Jack appears in the canton, and a red, white and blue bullseye, known as the Royal Air Force’s roundel, is featured in the middle of the fly. The distinct design of the RAF flag influenced the air force ensigns of several other countries, including Canada, India, Jordan, and Pakistan.

While there is no official Flag Act in the United Kingdom, there are general flag protocols. The RAF Ensign is flown below the Royal Navy’s White Ensign and above the Blue and Red British Ensigns. In addition, the Royal Air Force Ensign may not be used as a decoration or bunting, nor draped over a coffin at a British military funeral.

How to Purchase the Royal Air Force Ensign

Gettysburg Flag Works carries the RAF Ensign in three standard sizes. Each flag is digitally printed on durable, all-weather nylon with a canvas header & brass grommet attachment and reinforced stitching. Proudly made in the USA, our Royal Air Force flags can be purchased online, or by calling 1-888-697-3524.

Looking for other British flags? Browse our extensive collection of Flags of the United Kingdom, or contact us online for additional assistance.