Liberty Flags from the Revolutionary War

The words, “Liberty and Justice for All” are an unmistakable call for freedom, independence and resistance against tyranny. Even before the Pledge of Allegiance was written, these words carried great meaning, particularly during the Revolutionary War, when our nation’s very independence was at stake.

During this time period, several flags bearing the word “Liberty” emerged throughout the United States, and they remain a part of our nation’s collective history today.

The Spirit of Liberty Flags

Whether flown in an act of defiance or in celebration of victory, these liberty flags represent the pursuit for freedom and independence that was so strong during the Revolutionary War and beyond. 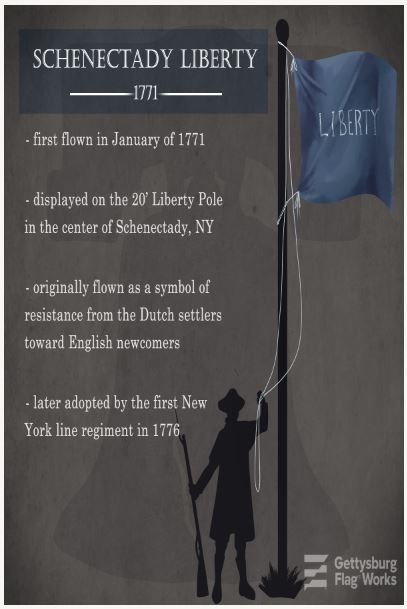 This square blue flag with “Liberty” sewn in white on both sides was originally flown in 1771. Hoisted on a 20-foot flag pole in the center of Schenectady NY, in an area known as the Stockade District today, the flag represented the original Dutch settlers’ resistance toward English newcomers.

Later, during the Revolutionary War, the Schenectady Liberty Flag was adopted by the 1st New York Line Regiment, which was largely made up of Schenectady residents.

Learn more about the Liberty Flag of Schenectady. 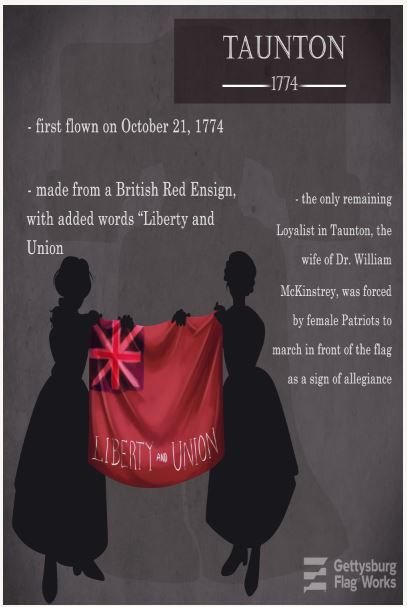 Also known as the “Liberty and Union Flag”, the Taunton Flag was first flown in 1774 as an early symbol of revolt against British oppression in Taunton, MA. It remains the city’s flag today. The red ensign features the flag of Great Britain in the upper left canton and is defaced with the words “Liberty and Union” across the lower portion.

After expressing disdain for the Taunton Flag, the wife of British Loyalist William McKinstrey was dragged from her Taunton home by female Patriots and forced to march in front of the flag as a sign of allegiance. 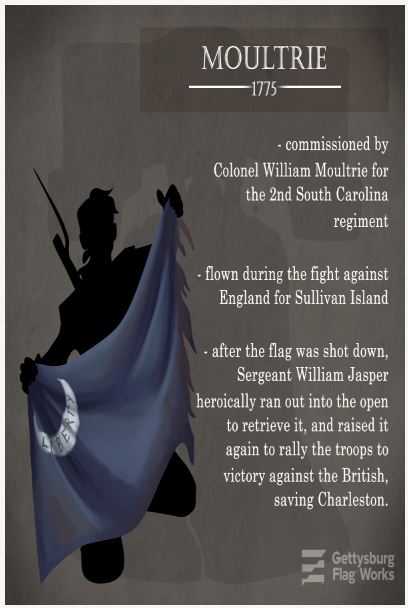 This navy blue flag featuring a white crescent in the upper left corner, with the word “Liberty” inscribed inside it, was commissioned in 1775 by Colonel William Moultrie to prepare South Carolina for war with Great Britain. It was flown by the 2nd South Carolina Regiment in the successful defense of Sullivan’s Island against the British fleet in 1776.

During the battle, the flag was shot down, but Sergeant William Jasper ran out into the open to retrieve it, and raised it again, rallying the troops to victory. The battle, and this heroic story, earned the Moultrie Flag a place in the hearts of the people of South Carolina, and secured it as a symbol a liberty in the South and the new confederacy. 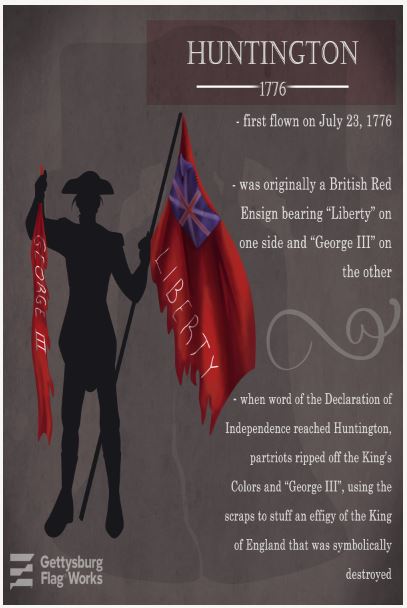 The first flag flown in Huntington, NY was the British Red Ensign with the Union Jack in the upper left corner. In 1774, the year of Huntington’s Declaration of Rights, the word “Liberty” was added to the front of the flag and “George III” was added to the back.

Two years later, when news of the Declaration of Independence reached Huntington, a crowd assembled where the flag was flying on the Village Green. The flag was lowered, the Union Jack and “George III” were ripped away, and the scraps of the flag were used to stuff an effigy of King George III, which was run up the gallows and destroyed. The remaining flag – all red with the word, “Liberty” in white – is known as the Huntington Flag. 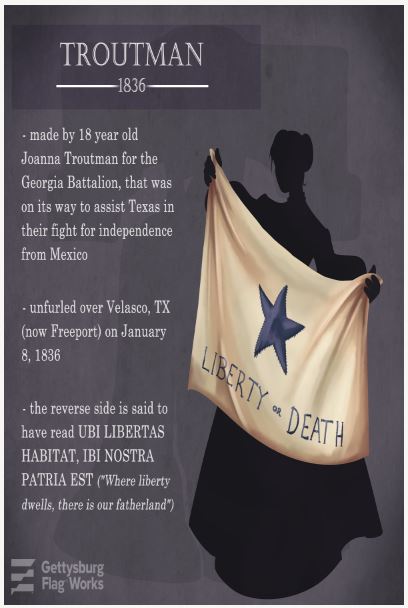 Although not a flag of the American Revolution, the Troutman Flag was flown in 1836 during the Texas Revolution between Texas and Mexico. It bears the words “Liberty or Death” on a white background beneath a blue five-point star, and the reverse side is said to include the Latin phrase, “Where liberty dwells there is my country”.

Sometimes referred to as the “First Lone Star Flag”, it was made by Joanna Troutman, a teenage girl from Georgia. She made the flag for the Georgia Battalion, a group of volunteers on their way to assist Texas in the fight for independence against Mexico. When the Georgians arrived in what is now Freeport TX on January 8, 1836, the flag was unfurled. It was then carried to Goliad, where Texas army leader James Fannin Jr. raised it as the national flag upon hearing the news that the Texas Declaration of Independence had been signed.

Many years after the Revolutionary War, America maintains its status as the “land of liberty”, and Liberty Flags are still flown today in many of our nation’s cities, including Huntington NY, Taunton MA, Schenectady NY, Moultrie County IL and throughout South Carolina.

Interested in purchasing a Liberty Flag for use in Revolutionary War re-enactments, or for display at your home or business? You’ll find many of the above designs, as well as several others, in our newly curated Collection of Liberty Flags.