The central part is the Globe. It depicts the Western hemisphere, because that’s where the bulk of the Corps’ action took place in its early history. The Globe also represents our global reach. If you pay close attention to the Marine Corps flag, you’ll notice that the Globe consists of two colors, and shows some lines of latitude.

Behind the Globe is the Anchor, which stands for our ties to the U.S. Navy. Since the earliest days, the Marines have worked with the Navy to be an amphibious fighting organization, able to project force ashore. The Anchor is ‘fouled,’ meaning it has rope (or line) wrapped around it. The Anchor’s fouling does not have a ‘bitter end,’ or a loose end; it is essentially perpetual. This shows that we aren’t going to disappear anytime soon; our time as a fighting force won’t come to an end.

Whether in a full color tattoo, on a t-shirt, on a Marine’s uniform, on a bumper sticker, or on any of the Marine Corps flags that fly across the globe, the Eagle, Globe, & Anchor is an important symbol of the Marine Corps’ culture and history. 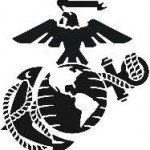 Check out all the Marine Corps Flags and related accessories here:

Jeremiah McCloud is a freelance writer, marketing consultant, and veteran of the U.S. Marine Corps. He joined the Marines in 2001, and attained the rank of Sergeant before attending the U.S. Naval Academy. After graduating from the Naval Academy, he served as a Marine Corps signals intelligence officer, and deployed to Afghanistan as part of a foreign military advisor team. Jeremiah writes on a range of topics including military lifestyle, politics, marketing, and strategy.