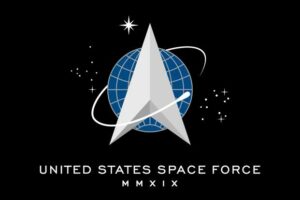 On May 15, 2020, the Official Space Force Flag was unveiled in a closed-door ceremony in the Oval Office of the White House. It is the first new service flag to be released in 70+ years, representing the newly established Space Force branch of the U.S. military.

About the U.S. Space Force

The United States Space Force (USSF) is the newest service branch of the Armed Forces, bringing the total number of branches to six. Signed into law by President Trump on December 20, 2019 as part of the National Defense Authorization Act, the branch will conduct space operations and protect the interests of the United States in space, as well as deter aggression, in, from and to space. The new service falls under the Air Force, in the same way that the Marine Corps falls under the U.S. Department of the Navy.

About the Space Force Flag

The flag design, which was made by artists within the Defense Logistics Agency that makes all of the President’s personal flags, features the official Space Force seal centered on a black background. The words “United States Space Force” and the Roman numeral equivalent of the year 2019, MMXIX, appear in white lettering beneath the seal. Dark blue and white are used to represent the vast recesses of outer space.

Each element of the design has meaning, starting with the central Delta wing symbol. Although it reminds many “Star Trek” fans of the Starfleet Command logo, the delta wing has military history dating back to the U.S. Army Air Forces in 1942. It’s said to symbolize change and innovation. The combination of dark and light shades of gray within the delta represent the 24/7 operations of the Space Force, while its upward orientation speaks to the branch’s central role in defending the space domain.

The dark blue globe, which is positioned behind the delta, represents the earthly home of the Space Force military branch, and its support to the joint warfighters. The elliptical orbit around the globe symbolizes defense and protection from potential threats and adversaries in the space domain, as well as “ongoing interagency cooperation and allied partnerships”, according to a fact sheet on the Space Force’s website.

The white North Star, located at the top left of the delta’s apex, signifies the Space Force branch’s core values. It is a guiding light of security, and alludes to a constant presence in space, both now and in the future. The two clusters of small stars on either side of the delta are said to represent the existing assets developed, maintained, and operated by the U.S. Space Force, while the three more prominent stars are a representation of the branch’s three main functions: to organize, train, and equip.

How to Order the USSF Flag

Gettysburg Flag Works is among the very first flag retailers to offer the Official U.S. Space Force Flag for retail sale. Made in the USA of durable all-weather nylon, the USSF flag is digitally-printed, single-reverse with four rows of reinforced stitching and a canvas header and brass grommet for attaching to a flag pole.