The just-concluded 150th anniversary of the battles of Gettysburg and Vicksburg brought renewed attention to the role flags played during Civil War conflicts.

When cannons and muskets began firing, regimental and other flags became essential ways of communicating amid the smoke and chaos. The banners rallied troops to common points on the battlefield, for example, or indicated the way toward – or away from – the enemy.

As a result, flags were targets for the other side to shoot at or to seize in the hopes of triggering confusion, dismay and surrender in enemy forces.

In “Gettysburg,” his 2004 account of that battle, author Stephen W. Sears caught the importance of flags in these words: “A dense blanket of battle smoke hung low among the trees and in the valley…making it difficult to separate friend from foe; the battle flags visible above the smoke clouds drew torrents of fire. The flag of the 14th Tennessee twice disappeared into the smoke and twice rose again…. 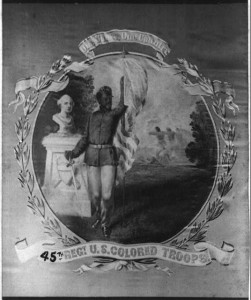 “There was a bitter, desperate struggle for the colors of the 2nd Mississippi. Yankees ‘kept rushing for my flag and there were over a dozen shot down like sheep in their madly rush for the colors,’ the Mississippi color bearer, W.B. Murphy, remembered. Finally, ‘a large man…made a rush for me and the flag. As I tore the flag from the staff he took hold of me and the color.’”

So precious were the flags, regimental as well as national, that soldiers were willing to die to capture them, protect them or keep them from enemy hands. In “Gettysburg: The Last Invasion,” which was just published, Allen C. Guelzo recounts the desperation of a close-in fight and the primal urge to defend precious flags.

With the members of his regiment about to be killed or overwhelmed, Colonel Charles Tilden of the 16th Maine “ordered the regiment’s colors torn from their staffs and cut up into patches the men could hide ‘about the persons of the survivors,’ before finally surrendering. The Confederates…were only able to seize a ‘very fine flag-staff and tassels,’ and some scraps of ‘a fine Yankee flag…lying in different places.’”

Even in defeat, the flag had been saved.