Every Marine Carries the Flag 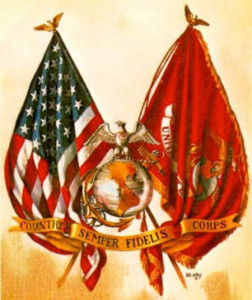 History of the Marine Corps Flag

Since the Revolutionary War, United States Marines have become very good at two things: making Marines, and winning wars. The Marine Corps has built its reputation for victory on the battlefield over nearly two and a half centuries, and in enough places around the globe to give truth to the statement that “we have fought in every clime and place.”

As one of the oldest war fighting organizations in the United States, the Marines have some great traditions, customs, and symbols. One of the Corps’ most iconic symbols is its service flag, officially called the Battle Color of the Marine Corps.

But the flag we see flying at every Marine post, hung on the walls of many barracks rooms, and even tattooed on the bodies of U.S. Marines the world over is not as old as the Corps itself.

‘On November 10, 1775, the Continental Congress approved the resolution to establish two battalions of Marines.’

Marines today consider the Continental Marines our ancestors. They were a rag-tag group of misfits who fought alongside the Continental navy in the pursuit of independence from Great Britain. But little is known about what flags they may have carried to identify themselves as Marines.

Some evidence points to the Grand Union flag (also known as the Continental Flag) being carried ashore by Continental Marines at New Providence on 3 March 1776. This flag consisted of thirteen stripes and the British Union Flag placed in the canton (the top inner corner).

It’s also possible that those early Marines carried the famous Gadsden Flag during that same operation. 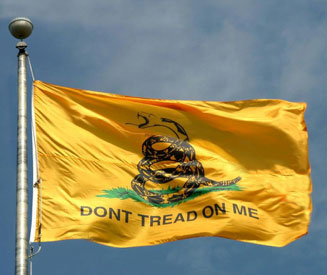 Also known as the rattlesnake flag, this is the “Don’t Tread On Me” flag that became so popular again after 9/11.

These early Jarheads may also have carried individual unit flags, as was sometimes the case during the Revolutionary period. But we don’t really have evidence of any of these.

The Marine Corps came into its own in the 19th century. From operations against the Barbary pirates (after which Marine officers started to carry the Mameluke sword), to the Seminole Wars (when Commandant Archibald Henderson, the “grand old man of the Marine Corps” stuck a note on his office door which said, “Gone to fight the Indians, be back when the war is over.”), to Harper’s Ferry and into the Civil War, United States Marines continued to bolster their reputation as fierce warriors.

It was during the first half of the 19th century that we also saw the development of the first unique Marine Corps flag. The origin of this first flag remains unclear, but we know that it was in use by the 1830s.

The original design featured a white field with yellow trim. It depicted an anchor and eagle in the center, and it was also emblazoned with a message: “To The Shores of Tripoli,” to highlight the significance of the Marines’ actions against the Barbary pirates and their amphibious landing and subsequent march to Derna, Tripoli.

This original flag was carried into battle during the Mexican-American war, but the design changed shortly after the conflict ended. The core components of the flag remained unchanged, but the text was amended in order to showcase our actions during the war. The text became “From Tripoli to the Halls of the Montezumas.” Although this phrase hasn’t appeared on a Marine Corps flag in a very long time, it may sound familiar to you. That’s because the Marines’ Hymn that we sing today starts out with the lines, “From the Halls of Montezuma to the shores of Tripoli.”

The flag was used more often for ceremonies than for field operations, especially during the Civil War. But we still needed a flag for practical purposes on the battlefield. So, we used a variation on the national flag. It retained the red and white stripes, and included an image of an eagle perched on a shield with stars all around it. This design fell out of use in 1876, and was replaced with a copy of the national flag with “U.S. Marine Corps” embroidered in the center.

Unrelated to the Marine Corps flag at the time, but still a very important event occurred in 1868: the adoption of the Eagle, Globe, and Anchor as the official emblem of the Marine Corps. This emblem also changed a bit over the years, but eventually played a key role in the design of the Battle Color.

The modern predecessor of our Battle Color came into use during the early part of the 20th century. The Marine Corps flag of 1914 put the Eagle, Globe, and Anchor to good use by making it a central part of its design. Unlike today’s flag (which is predominantly scarlet red), the 1914 flag had a dark blue background, or field. The emblem was placed in the center of the field, and was encircled with a laurel wreath.

It also added two things that might look similar to our current Battle Color. Above the wreath and emblem was a scarlet-colored ribbon that said, “U.S. Marine Corps.” Underneath it all was another scarlet ribbon, which said, “Semper Fidelis.” Our motto, semper fidelis, is Latin and means always faithful.

The flag retained the yellow fringe of some previous designs, but it was removed in 1921, along with the text that was embroidered on the flag. All flags that still had the yellow fringe were removed from official use the next year.

During this period, individual Marine units began placing special decorations on their flags. The decorations were originally embroidered directly onto the flags, but most units quickly acquired too many honors for that to remain practical. Instead, units began to attach silver bands to the flag that served to commemorate the unit’s actions in specific battles. The practice of attaching silver bands was discontinued in 1961.

However, the tradition of battle streamers lives on today, with organizational colors (Marine Corps flags officially assigned to Marine units) and the Marine Corps Battle Color carrying dozens of streamers to display the honors won in battles around the globe.

In 1925, the Marine Corps adopted scarlet and gold as the Corps’ official colors. But it neglected to update the design of the flag for several years. The blue-field flag of 1914 remained in use until almost 1940! On 18 January 1939, the Marine Corps finally updated its Battle Color to include the official colors of scarlet and gold. That design has remained essentially unchanged to this date.

Jeremiah McCloud is a freelance writer, marketing consultant, and veteran of the U.S. Marine Corps. He joined the Marines in 2001, and attained the rank of Sergeant before attending the U.S. Naval Academy. After graduating from the Naval Academy, he served as a Marine Corps signals intelligence officer, and deployed to Afghanistan as part of a foreign military advisor team. Jeremiah writes on a range of topics including military lifestyle, politics, marketing, and strategy.