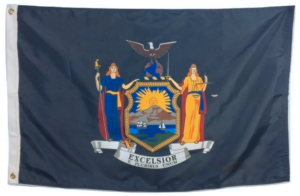 New York State’s flag has remained the same for the past 119 years, but that’s all about to change. This week, Gettysburg Flag Works unveiled the newest version of the New York State flag, but you’ll have to look close to find the difference. While the basic design of the flag remains the same, three words have been added to the existing scroll. ‘E Pluribus Unum’, Latin for “out of many, one” now appears below the New York State motto, “Excelsior”, another Latin word meaning “ever upward”.

Albeit a minor update, adding these three little words was quite a feat. Especially considering it also meant changing New York State’s coat of arms and official state seal – neither of which have been altered in 138 years, and both of which required approval from the New York State Legislature. Nonetheless, the newly designed flag delivers a powerful unifying message during a particularly divided time in our nation’s history.

The proposed changes to the flag were first announced in Governor Andrew Cuomo’s State of the State Address on Wednesday January 8, 2020. “Our founding fathers said it clearly, that the idea of unity was the key to America’s future. In 1782, on the first seal of the United State of America, they said it in three simple words, ‘e pluribus unum’ – out of many, one,” stated Cuomo. “In this term of turmoil, let New York State remind the nation of who we are. And let’s add ‘e pluribus unum’ to the seal of our state, and proclaim at this time, the simple truth that without unity, we are nothing.”

A seemingly small change with big meaning, the seal is pervasive in the state government, appearing on letterhead, lecterns, even the walls and doorknobs of state offices – so a change was no small undertaking. In addition, changing the seal also meant altering the coat of arms, a historic state symbol that dates back to the Revolutionary War.

The State Legislature ultimately approved the change as part of the 2021 State Budget in April 2020, noting that state flags and seals would only be replaced upon reaching the end of their natural life or should they fall into disrepair, thereby limiting cost concerns.

Gettysburg Flag Works had the honor of making the very first new flag for the state, and is pleased to be among the first to offer the 2020 New York State Flag to the public, as well.

The official seal, which included an image of a rising sun over the mountains, dates back to 1777, and a year later, the coat of arms was added to the seal. Over the next century, four revisions were made, but between 1892 and 2020, the coat of arms and seal remain unchanged.

Today, as it did in 1892, the seal features an American eagle perched on a globe with the North Atlantic Ocean and the outlines of its shores. Below, is a landscape of a smiling sun rising over the mountains and the Hudson River with two ships in the foreground to represent intrastate and international trade. On the left stands Lady Liberty, and on the right is Lady Justice. At the very bottom is a scroll with the state’s motto, the Latin word “Excelsior”, and now, just beneath it, the words “E Pluribus Unum”.

The 2020 Official New York State Flag, featuring the newly designed State Seal and Coat of Arms on a solid blue background, is now available from Gettysburg Flag Works. Choose from a variety of sizes, mounting types and materials. Order online, or give us a call at 1-888-697-3524.