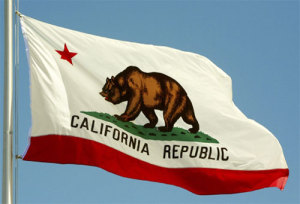 On September 9, 1850 – 165 years ago – California entered the Union after being a republic, not a territory of the United States. It was as if a foreign nation had decided to join the U.S. – and it brought its own state flag along.

“On June 14, 1846, a small band of settlers marched on the Mexican garrison at Sonoma and took the commandant…prisoner,” the state’s website explains. “They…declared California to be a Republic independent of Mexico. This uprising became known as the Bear Flag Revolt after the hastily designed flag depicting a grizzly bear and a five-pointed star over a red bar and the words ‘California Republic.’”

That flag officially became the California state flag in 1911. The grizzly represented strength, while the single star was a nod to Texas, the Lone Star State, which had separated itself from Mexico in 1836 and briefly became a republic.

The U.S. was very eager to have California join the nation because gold had been discovered there and triggered the gold rush of 1849. A year later, the new state was accepted. (Trivia question: Who first brought down the Bear Flag and lifted the Star-Spangled Banner in Sonoma? Answer below.)

As for designating a capital, the Golden State took its time. The first option was San Jose, which proved inadequate, and the next choice was Vallejo. Still unhappy, the legislature moved to Benicia, a small town near San Francisco, and a statehouse was constructed. But with no room for growth, the state finally settled its capital in Sacramento. 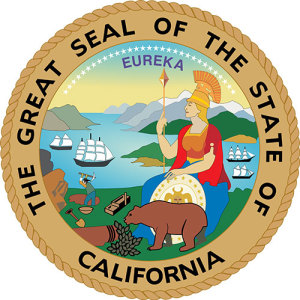 The capital was near Sutter’s Mill, where the gold rush had broken out. The state’s seal contains the word “Eureka,” meaning “I have found it,” a reference to the discovery of the gold. According to the California Department of Parks and Recreation, “In 1957, attempts were made to establish ‘In God We Trust’ as the state motto, but ‘Eureka’ was made the official state motto in 1963.”

The seal also features Minerva, the Roman goddess of wisdom, sailing ships, a prospector, the grizzly bear from the republic’s flag and an arc of 31 stars, indicative of California’s becoming the 31st state.

As for Sacramento, it adopted its current municipal flag, its second, in 1989. Described by one vexillologist as “modernistic” in design, it has a prominent “stylized white S curving lazily” from the bottom left to the top right. The shape represents two rivers in the area. The banner includes five colors: gold, white, green and two shades of blue.

The first city flag, adopted just 25 years earlier, was littered with almost cartoonish images: a prospector, the capitol building, an old-fashioned locomotive and a Pony Express rider heading west in a coonskin hat.

Lying in front of the capitol on that first flag was a red camellia. That’s not surprising because the co-designer of the flag was E.A. Combatalade, founder of the Camellia Festival Association, which hosted its annual fete in Sacramento.