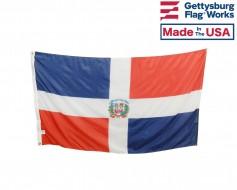 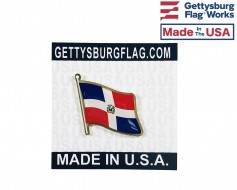 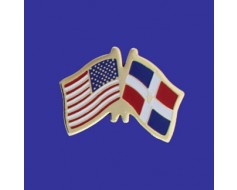 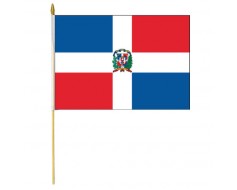 The flag of the Dominican Republic, as described by Article 96 of the Dominican Constitution, features a centered white cross that extends to the edges and divides the flag into four rectangles —the top ones are blue (hoist side) and red, and the bottom ones are red (hoist side) and blue. A small coat of arms featuring a shield supported by a bay laurel branch (left) and a palm frond (right) is at the center of the cross; above the shield, a blue ribbon displays the national motto: Dios, Patria, Libertad (God, Fatherland, Liberty). Below the shield, the words República Dominicana appear on a red ribbon (this red ribbon is depicted in more recent versions as having its tips pointing upward -see image below-). In the center of the shield, flanked by three spears (two of them holding Dominican banners) on each side, is a Bible with a small cross above it, which is opened (according to popular belief) to the Gospel of John, 8:32, which reads Y la verdad nos hará libre (And the truth shall set you free). The blue on the flag stands for liberty. The white on the flag stands for salvation. The red on the flag stands for the blood of heroes.